﻿ # 39 The need for transport systems in a multicellular organism
Biology

# 39 The need for transport systems in a multicellular organism

The transport system enables the rapid delivery of nutrients and O2 to as well as the removal of metabolic waste products (including CO2) from all cells of the body for survival.


All cells need to take in substances from their environment, and get rid of unwanted substances.

In a single-celled organism, this can happen quickly enough by diffusion alone. This
is because: 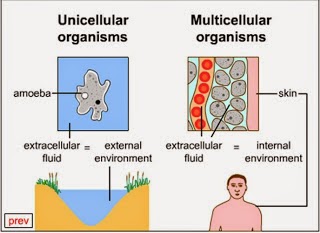 In a large organism, diffusion is no longer sufficient. This is because:
Large organisms solve these difficulties in two ways:

- #39 Structure Of Transport Tissues In Plants
Plants have 2 transport systems: xylem: transports water and inorganic ions from the roots to the leaves.phloem: transports food made in the plant (sucrose and amino acids) from the leaves to the rest of the plant. Both of...

- # 26 Surface Area To Volume Ratios, Investigating Diffusion
As the radius of a cell ? from 1x to 3x (left), the surface area ? from 1x to 9x, and the volume ? from 1x to 27x. Source: Nature Education As a cell increases in size, there is less surface area in proportion to its volume.  Relatively there...

- #23.2 Cell Membranes And Transport - Syllabus 2016
4.1 Fluid mosaic membranes  4.2 Movement of substances into and out of cells The fluid mosaic model introduced in 1972 describes the way in which biological molecules are arranged to form cell membranes. The model has stood the test of...